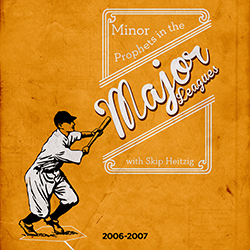 Minor Prophets in the Major Leagues

Why do we call Jonah, Amos, Obadiah, Malachi and the others the "minor" prophets? It certainly isn't because their messages were less important! Prophets are like people holding a wire from heaven and wire to the earth, with God speaking through them. At times, God used these unique men to proclaim His truth, or to denounce men's sin, or to predict the future, both near and far-off. Other times, He used them to show His truth by demonstration, through events in their lives. In this in-depth series, Pastor Skip Heitzig presents important truths about these little books with big messages.


MESSAGE SUMMARY
All of us have a need to see and understand God. But what does it take for God to get your attention? The book of Hosea speaks of God using the marriage of Hosea and his wife Gomer to depict a demonstration of events to come and cause them to recognize the degradated state the house of Israel was in. God will use/allow any means to get our attention to turn to Him but do we really want that extreme? I hope not, but if that is what it takes then God, because He loves us, will allow just that. If you find many hardships, disappointment and tough times, stop, think and turn to God for He has the answers you seek.

DETAILED NOTES
God used Prophets to speak to nations of people especially the nation of Israel. His word through the prophets and predictions of things to come are often the messages God sent to get the attention of His people, the predictions of the future were all meant to stir the hearts of the people back to the God they had left. Prophets were sent to the Israelites as a direct way for the people to understand what God wanted them to hear. Most of the time the prophet's words were a warning of things that will happen if they kept on the same path.

Hosea is very specific in his message to the people of the kingdom of Israel. At this time in the scriptures the kingdom was split and Hosea is commissioned by God to speak to the people of the northern kingdom. So, the Lord told Hosea to take a harlot for a wife. God uses demonstrative ways to show us things we need to understand and learn. The kingdom of Israel need to hear from God but the message was not getting through so God chose to use Hosea in a very graphic picture of a relationship between a husband and wife to get across to the Israelites of how this represents the very manner and relationship they had with God, mainly the dis-regard for God. Gomer, Hosea's wife, bore a son and God called him Jezreel. Gomer, Hosea's wife, kept on in her harlotry which broke the heart of Hosea, this same relationship of Hosea and Gomer was to be a demonstration of how Israel was playing the harlot by idol worship. In this we see that Hosea was faithful to Gomer just as God stays faithful to us. The people of Israel parted from the Lord God and worshiped idols and this broke the heart of God just as it did to Hosea's heart.

Many people, when reading this account of the Prophet Hosea think of it as not being real because; would God really tell a man of God to marry a prostitute? It seemed hard for Hosea and it was, but Hosea knew God and trusted in God and God sustained Him for His cause. It was all done for the love of God toward Israel. God had a plan for the people of Israel through the son of Hosea, Jezreel. The People of Israel knew of Hosea and Gomer and had seen the many times Gomer had gone out to seek pleasure. Don't you think the people wondered why a man of God would stay with a woman as Gomer. But God knew that and sustained Hosea to remain with Gomer. For the people needed to understand what God was trying to say to them through Hosea. We sometimes need demonstrations from God of His love for us and sometimes it's for our breaking so we can come before the Lord God and reconnect the relationship.

Gomer bore sons and daughters that had names that spoke of the things to come upon Israel. The son, Jezreel, to take revenge on the house of Jehu and the daughter's name, Lo-Ruhamah, means no mercy on the house of Israel. Then another son was conceived of Gomer, Lo-Ammi, which means they are not my people. So you see by the life of the relationship between Hosea and Gomer a message was coming out of that and that is, God will scatter the people and then take revenge of the house of Jehu and these people are not mine and I will not be their God. God casts away His people but Israel will be numbered more than the sand of the shore. Why? Because God made a covenant with Abraham, Moses and David and God keeps His unconditional covenant. So, even when God is very upset with Israel, God will never forsake them. God keeps His word. We are in the same boat for God dwells in us all by the gift of God by Jesus Christ on the cross even when we were in a sinful state. For while we were yet sinners Christ died for us. Romans 5:8. God will never leave us or forsake us, that is a promise to us.

Hosea was used by God to get the attention of the people of Israel of His love for them by the demonstration of the life of Hosea. It took many years for all of the message of God to the people of the house of Israel but in the end they took notice of God again.


MESSAGE SUMMARY
Are you running from circumstances that appear hopeless? Are you feeling the tugging on you heart that you can't quite understand? Well these all may be the prompting of the Holy Spirit of God to get your attention. Hosea and Gomer had a marriage that was difficult and full of impossible issues but God had a purpose for it all. Their marriage was a picture to the people of Israel of how we should not treat God. Gomer had freewill and made a bad choices but Hosea stayed faithful in the midst of it all…, why? Because Hosea listened to the grace of God and was sustained. You may be going through difficult times, circumstances of hardships, but if you listen to the prompting of God you will be sustained, but if you reject His promptings you could suffer and take the wrong paths. God will demonstrate His love to you in every way but it's up to you to recognize it and choose whom you will serve, God or man.

DETAILED NOTES
Chapter one of Hosea is really about rejected love and Chapter two is about the faithful love to one who is not faithful. Hosea has been rejected by his wife Gomer, a prostitute. God was painting a picture to Israel of how Israel was treating Him in rejecting God with idolatry. Hosea was under prescribed stress, all of it designed by God. For God needed to demonstrate to the people of Israel how a nation of idolatry will end up. God is going to give promises to these people but only if they stay faithful to Him but first God will have to get the point across to them by some very stern words and allow things to happen to them. God allowed the Assyrians to come and take them away and then God said, "You are not my people", God rejects them and then God extends this love back to them with mercy.

Often times we are much like the people of Israel and Hosea. We often need to be shaken and turned up-side-down all in an effort to show mercy to a wayward people. God will extend mercy and allow hardship in order to get you to think of what is really going on in your life. God's grace is seeking to bring those to Him and if that means breaking us then so be it for God knows our frame that we are but dust and God showed us grace by sending His Son to the cross. So, will we put aside such a loving God who is so interested in us that He sent His Son to die for us?

Hosea's marriage was a demonstration to the nation of Israel of loving mercy and grace, to a people who were treating Him badly. God will send many people, circumstances and hardships into our life in allowance of His grace and mercy so we may see with our heart, and understand with our mind the condition we are really in. Israel was in a bad condition and God loved them so much that He sent Hosea to display a message of what condition they were about to descend to, and how they were acting toward God and how disrespectful Israel was treating God. But God has ways to bring us to our knees when we won't bend our knees willingly to Him. Israel is often called a people with a stiff neck, unbending, self-willed in the wrong perspective and slow to change her ways, however, God chooses Israel anyway knowing all these things. We are so like this nation Israel when we go after other beliefs and lusts that take the priority of the relationship that we have with God. You see the things of this world offer many fine and great things that tempt many in ways that assault the peace and joy of those who believe and those who don't. We must understand, as Hosea demonstrated, that God will have no other things in place of Him. Gomer's desire was for the material things of the world and she could not see the loving grace of God through her husband Hosea who loves her. Gomer's heart was not for God but for lusts of the flesh instead of the things of God. Gomer could have had it all only if she returned to Hosea and put away her harlotries. God wanted the people of Israel to see this relationship of Hosea and Gomer and make the connection that they were playing the harlot just as Gomer was doing but they failed to see the love of Hosea and how he would take Gomer back. God was still willing to take back the people of Israel and He would stay faithful to them, for God will still seek those who go astray even while they are still running from Him. God still comes with gifts of blessings we don't desire. Hosea came to Gomer, while looking for her with gifts to express his love to her. We should be like God in the unconditional love to those who leave the love they once knew, Jesus, and help to restore their relationship back to God.

We should not be ignorant of the mercy of God for God will not always strive with man so we must pay attention to the things in our life that appear to have a stinging theme as a message from God that He allowed to happen to you. For God knows what you need and will not let you go to a place of no return. For God is able to complete that work which He started in you, He will be faithful to do all that He says. You can rest and rely on that.