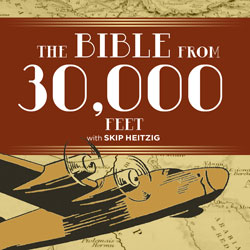 Have you ever wanted to learn how The Bible fits together? The Bible from 30,000 Feet is an overview study through the entire Bible, hitting the highlights of its people, places, events and themes in about a year. This series will give you a coherent understanding of the holy word of God.


MESSAGE SUMMARY
Join us on a tour over the books of 1 & 2 Timothy as we take our fifty-sixth flight over the Bible from 30,000 Feet. These loving letters to Timothy, a young pastor in Ephesus, reveal Paul's true love for his brother in Christ and desire to encourage him in the Word and warn against false teachings. In these letters, Paul exhorts Timothy to stand strong and "preach the word" (2 Timothy 4:2). The key chapters to review are 1 Timothy 1-6 and 2 Timothy 1-4.


Paul, the experienced apostle, writes to young pastor Timothy, who is facing a heavy burden of responsibility in the church at Ephesus. The task is challenging: false doctrine must be erased, public worship safeguarded, and mature leadership developed. In addition to the conduct of the church, Paul talks pointedly about the conduct of the minister. Timothy must be on guard so that his youthfulness doesn't become a liability, rather than an asset to the gospel. He must be careful to avoid false teachers and greedy motives, pursuing instead righteousness, godliness, faith, love, perseverance, and gentleness as befitting a man of God.

Paul writes the epistle of 1 Timothy

Peter and Paul martyred by Nero


Paul had four purposes in writing this letter to Timothy.  First, he wanted to encourage Timothy to oppose false teaching.  Also, he wanted to furnish Timothy with written credentials authorized by himself.  Further, he wanted to instruct him in the management of church affairs. Finally, he wanted to exhort him to be diligent in his pastoral duties.


Macedonia - The northern part of Greece located between the Adriatic and Aegean Seas.


Ephesus - A city on the west coast of Asia Minor where Paul established a major church.


Timothy - A traveling companion of Paul. He was the son of a Jewish mother and a Gentile father. His mother, Eunice, and grandmother, Lois, were believers in Jesus.


Paul - Known as Saul before he became a Christian. Born in Tarsus in Asia Minor, he studied Jewish tradition under the elder Gamaliel, becoming a zealous Pharisee.


Hymenaeus and Alexander - Blasphemers whom Paul "delivered to Satan."


Paul may have dictated this book to a secretary, possibly Luke.


Paul wrote this epistle from a Roman dungeon to his young protégé, Timothy.  This was his second letter to Timothy, and the epistle was the final letter written by Paul. In it, Paul encourages Timothy to stand strong for the faith, to endure hardship, and to preach the Word.

Saul's conversion on the road to Damascus


The book of 2 Timothy consists of Paul's final instructions to his "beloved son," a young pastor in Ephesus. The letter can be broken down as follows: Stand up for the faith - Chapter 1. Stand up in all you do - Chapter 2. Stand up in the battle - Chapter 3. Stand up until the end - Chapter 4.


Ephesus - The most important city in the Roman province of Asia, on the west coast of what is now Turkey. It was where Timothy was a minister and also where Paul sent Tychicus.


Thessalonica - This city was situated at the intersection of two major Roman roads, which led to it being highly prominent.  Demas headed here after leaving Paul.


Dalmatia - A Roman province in the mountainous region east of the Adriatic Sea.  It is also called Illyricum in Romans 15:19.  This is where Titus headed after leaving Paul.


Corinth - A port city of Greece that was a center of trade and industry.  Paul mentions that Erastus stayed there.


Miletus - Part of the Roman province of Asia.  Trophemus stayed here because he was ill.


Aquila and Prisca/Priscilla - A leather worker and his wife who were good friends with Paul.  This couple helped Apollos come to a fuller understanding of the gospel.


Demas - A co-laborer with Paul; Paul mentions that he deserted him because of his love for the present world.


Erastus - An assistant of Paul who helped in Timothy's mission to Macedonia so that Paul could continue to work in Ephesus.


Eunice - Timothy's Jewish mother who was noted for her faith and raised Timothy in the Scriptures from childhood.


Hermogenes - Asian Christian who turned away from Paul.


Onesiphorus - His name means "profit-bringer;" he brought Paul refreshing when Paul was in chains.


Philetus - A teacher representative of those undermining the Christian doctrine of the resurrection.


Trophemus - An Ephesian Christian who likely accompanied Paul to Europe after the Ephesian riot.  Paul had to leave him in Miletus because he was ill.


Tychicus - He went with Paul to Jerusalem with the collection.  He likely was the one who took the letters to the Colossians and the Ephesians.


Soldier, athlete, farmer - Paul uses these as pictures of the Christian life.


Christian math (multiplication) - In 2:2 Paul tells Timothy to share what he's learned with faithful men so that they'll tell their friends and so on, and so on...


With a little help from my friends - Paul mentions 15 of his friends in the closing passages of the book.


MESSAGE SUMMARY
We have landed our flight over the Bible from 30,000 Feet. As we touch down and head to pick up the final baggage from our 65 flight series, our last sky-high view of the scriptures will includes this final Q&A Celebration. Pastor Skip and others answer questions from the last year, as well as on the spot questions from the audience.