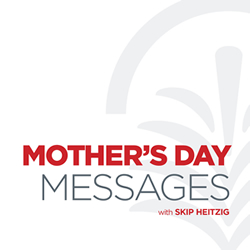 A mother's love is an example of God's great and sacrificing love for us. For many people, moms shaped their lives and brought them to a saving knowledge of Jesus Christ. This collection of messages focuses on these important women, who hold a special place in the heart of God.


MESSAGE SUMMARY
This summer portends to be the year of the Super-Hero: Spiderman, The Transformers and the Fantastic Four all are making their reappearance to save the day! But there's another hero we honor today (or should we say heroine). In fact she probably already cooked you breakfast this morning! It’s the woman of the home—Mom! Today we pay tribute to this unique individual who helped to transform our lives.

OUTLINE
I. Her Designation (Vs 10)


MESSAGE SUMMARY
Timothy demonstrated genuine faith and loyalty to the Lord, and Paul the apostle credited these traits to how Timothy was raised by his mom and grandmother. As we examine Paul's second letter to Timothy, we discover three important ways that moms can invest in their children so they will fear the Lord and desire to serve Him with their lives.

STUDY GUIDE
Mothers are special. They can change the world through the influence they have on their children. In the New Testament, we find a mother named Eunice and a grandmother named Lois, who together trained up a world changer by the name of Timothy. In this teaching, we discover from their example three investments women can make in their children that can change the world.

First, Eunice and Lois imparted tenderness to Timothy (see 2 Timothy 1:4). Paul remarked that he remembered Timothy's tears. Apparently, he had seen Timothy weep one of the many times the two of them served alongside each other. It's interesting that the Holy Spirit moved Paul to record for all of the church something that could embarrass a man. This underscores the significant place that tenderness should have in the heart of a Christian. Often, a mother's heart is reflected in the tenderness of her children. It was well said that God couldn't be everywhere, so He invented mothers. One of the ways that God is everywhere is through the love of mothers. Evidently, Timothy's father was not involved in training Timothy to be a man of God. Whether he died or abandoned his family, whether he was an unbeliever or simply didn't get involved (see Acts 16, which mentions that Timothy had never been circumcised since his dad was Greek), he was not the one to whom God credited Timothy's discipleship. Mothers, please comfort and display tenderness to your children, for it meets one of their most essential needs and is one of God's characteristics (see Isaiah 66:13). Tenderness makes a man approachable, relatable, believable, and credible, and Timothy's tender heart came from his mother and grandmother. Ecclesiastes 3:4 states that there is a time to weep, and Luke 6:21 says that those who weep will be blessed. David wrote of drenching his couch with tears (see Psalm 6:6), and Jesus wept several times. Why might this seem embarrassing to us? What does it say about our culture?

Eunice and Lois also imparted godliness to Timothy (see 2 Timothy 1:5). The name Timothy means one who fears God, and it is likely that his mother gave him this name. Her name, Eunice, is the Latinized form of the Greek word euniké, referring to the winged goddess of victory or one who conquers well. Whether she was a single mom or bore the spiritual burden of parenting alone, she lived up to her name as she held together a divided household and raised her son to be a faithful follower of Christ—so much so that Paul invited her young son, who was either in his late teens or early twenties, to join his ministry team. Her life embodied the Scottish saying that "an ounce of mother is worth a pound of clergy." Paul referred to her "genuine faith" that she had passed down to her son. Abraham Lincoln rightly said that "no one is poor who has a godly mother." Last week, Skip mentioned that the fear of God is a necessary trait for someone who has been radically saved; Timothy's name reminds us of this. Read Proverbs 1:7-9. Why do you think this trait is being repeated for us?

Thirdly, Eunice and Lois passed on boldness to Timothy (see 2 Timothy 1:6-7). Tenderness coupled with genuine faith results in the courage to serve the Lord fully. The gifts Eunice passed on to Timothy gave him the boldness he needed when fear began to grip his heart (see v. 7). Paul exhorted Timothy to stir up this confidence within him, to stoke its fires and be a bold witness. Tenderness and godliness provide the impetus for boldness. The product of genuine faith is faithful service, and Timothy's service provides quite a testimony. He was Paul's travel companion, received multiple letters from Paul, and was appointed a pastor. The great apostle referred to him as a true son in the faith with whom he had an unparalleled like-mindedness, and through Paul, God gave Timothy the father he didn't have. Moms, be encouraged that when you lay your loving hands on your children in prayer and blessing, someone else will lay affirming hands on them, upholding their gifting and their faith. But you cannot pass on what you do not have. You cannot direct your children toward a goal that you know nothing about, so ask God for wisdom and be encouraged to train up your children with His goals in mind. Although your job never ends, be inspired that your influence lasts a lifetime. What was your mother's influence like? What goals did she establish? Have other people done these things in your life? Who stirred or stirs up your gifts when you doubt or fear?

Godly mothers can raise children who change the world.


MESSAGE SUMMARY
Today we pay a special tribute to those unique individuals we call our mothers. They have given us life on this earth, and their influence has transformed our lives. We will consider a woman from the Old Testament who became the mother of the prophet Samuel. Her name is Hannah and her name means favor or grace. Despite difficult circumstances, Hannah was shown favor by God. Let’s glean some insight from this wonderful woman as we honor our own moms today.

In this teaching, Pastor Skip paid special tribute to those unique individuals we call mothers. They have given us life on this earth, and their influence has transformed our lives. Pastor Skip considered a woman from the Old Testament who became the mother of the prophet Samuel. Her name was Hannah and her name means favor or grace. Despite difficult circumstances, Hannah was shown favor by God. Pastor Skip's path through the text was as follows:

Connect Up: Though God is often referred to as Father in Scripture, there are some texts that describe maternal characteristics (see Psalm 17:8, Psalm 57:1; Luke 13:34). How does God's maternal nature help you understand God's caring and nurturing character?

Connect In>: James says that pure religion before God is helping orphans and widows (see James 1:27). How can the body of Christ minister to mothers more effectively, especially widows and single mothers?

Connect Out: What are some ways you can reach out to mothers, showing the love of God in tangible and creative ways?


MESSAGE SUMMARY
First celebrated in a church in 1908, Mother’s Day quickly became a national observance. On this day we give honor to those unique women we call our mothers. But perhaps the most unusual mom ever was one from the pages of the Old Testament named Deborah. Her interesting blend of personality and giftedness not only impacted her own family but her nation as well. Notice five characteristics of this most interesting mom in the world.

First celebrated in a church in 1908, Mother's Day quickly became a national observance. On this day we give honor to those unique women we call our mothers. But perhaps the most unusual mom ever was one from the pages of the Old Testament named Deborah. Her interesting blend of personality and giftedness not only impacted her own family but her nation as well. Notice five characteristics of this most interesting mom in the world.

Connect In: God has used prophets in the church, but we must be on guard against false prophets. "Dear friends, do not believe every spirit, but test the spirits to see whether they are from God, because many false prophets have gone out into the world" (1 John 4:1, NIV). 1 Thessalonians 5:20-21 reminds us, "Do not treat prophecies with contempt but test them all; hold on to what is good." How is the church to test the words of people who claim to speak for God?

Connect Out: Pray for women—mothers, wives, and singles—as well as for women who are unbelievers.


MESSAGE SUMMARY
This is a very special day but in a very unique time. As we gather together in our cars or online, we consider the relationship that Jesus had with His own mother, Mary. Though the New Testament gives sparing information about the upbringing of Jesus, we can conclude that there were at least three ways to describe the relationship of Christ to Mary.

This is a very special day but in a very unique time. As we gather together in our cars or online, we consider the relationship that Jesus had with His own mother, Mary. Though the New Testament gives sparing information about the upbringing of Jesus, we can conclude that there were at least three ways to describe the relationship of Christ to Mary.

Connect Up: What does it mean to do "the will of [the] Father" (v. 50)? Read Psalm 23:3, Psalm 27:8, and Philippians 1:6. Is it more important to pursue God's will or to pursue God Himself? Do we want to know God more, or do we want some kind of foolproof formula for life? Ask God for His help to understand the difference. Read Matthew 7:7-8 and James 1:5 for guidance.

Connect In: What are you doing in these quarantine days to stay connected with your church family? Share advice and practical tips for staying in touch, praying for each other, and serving where it's possible and needed.

Connect Out: How can the lessons learned from Jesus' interactions with His biological family encourage us as we consider any unsaved members of our own families? What is the hardest thing about not giving up on their salvation—or on the salvation of anyone you might consider unreachable? Read Luke 18:27. Encourage each other with the knowledge that God can do what is impossible for us, and that we shouldn't stop praying for them.