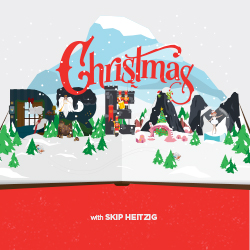 In this short series, Skip Heitzig examines the story of Christmas, considering the importance of Jesus' earthly parents--Joseph and Mary.


MESSAGE SUMMARY
Mary, the mother of Jesus, is central to the story of Christmas. Unfortunately, people are greatly divided about her importance and her role. Some magnify her too much, making her more important than even Jesus. Others ignore her and fail to give her the esteem she deserves. Today, we briefly consider Mary and five notable attributes that formed her personality.

Mary, the mother of Jesus, is central to the story of Christmas. Unfortunately, people are greatly divided about her importance and her role. Some magnify her too much, making her more important than even Jesus. Others ignore her and fail to give her the esteem she deserves. In this teaching, Pastor Skip considered Mary and five notable attributes that formed her personality.

Connect Up: Mary opened her prayer with the phrase "My soul magnifies the Lord" (v. 46). The word for magnify is megalunó. It means to make or declare someone or something as great; to enlarge or increase. How do we enlarge our view of God through worship?

Connect In: How is Mary a model for us as believers? (Hint: think of her praise, her knowledge of theology and Scripture, etc.)

Connect Out: Pastor Skip reminded us that there are many false views of Mary. How can you reach out to individuals who have nonbiblical ideas about Mary and witness to them in truth and love?


MESSAGE SUMMARY
Throughout Scripture, we see that the Lord often used dreams to communicate His truth to people. In this special Christmas teaching, Pastor Skip looked at the forgotten man of Christmas—Joseph, Mary's husband and Jesus' stepfather. As we study Matthew 1:18-25, we learn that Jesus was the ultimate fulfillment of Joseph's dream.

Everyone dreams every night. We may not remember the dreams, but we have them. Some last just a few seconds; others can last up to thirty minutes. Psychologists tell us that dreams are our way to subconsciously deal with emotions and experiences.1 Throughout Scripture, the Lord used dreams to communicate His truth to people like Abraham, Jacob, Joseph, and Daniel. In this special Christmas teaching, Pastor Skip looked at Joseph, Mary's husband and Jesus' stepfather. The first Christmas was not what Joseph—or Mary, for that matter—expected. Mary was unwed and expecting a child; Joseph was about to privately divorce her before the Lord intervened with a dream that ushered in the promised Messiah. Jesus was the ultimate fulfillment of Joseph's dream. Pastor Skip's path through the text is as follows:

Connect Up: Christmas is about one thing: the Father sent His Son, Jesus, to die so we might live. There was life in Mary's womb that led to the tomb and death, but in the tomb was the Son of God, whose death led to life. Why do you think God connects both death and life in our relationship to Him (see Matthew 16:24-25; Mark 8:34-35; Luke 14:27)? How is this truth reflected in baptism?

Connect In: Sometimes our relationships with others in the body of Christ can be confusing. How are we in the church to work through problems and predicaments with one another to bring clarity and compliance? Read Matthew 18 and Acts 6:1-7. As both references show, God's people must be compliant, spiritual people, seeking His clarity and submitting to His Word.

Connect Out: There's lots of confusion in the world regarding marriage (non-married people living together, etc.). What can you learn from Joseph and Mary's commitment to one another through marriage? How can you lovingly share with others what a biblical marriage looks like, particularly to unbelievers or people struggling with their faith?


MESSAGE SUMMARY
Christmas is not really Christmas without our Lord Jesus Christ—God changed everything with the birth of His Son. In this Christmas Day message, we learn that Jesus' humble birth showed His incompatibility with the world and accessibility to those who come before Him just as they are.