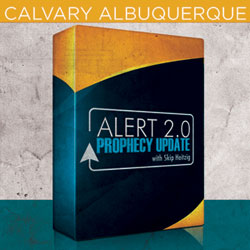 Alert! The fulfillment of Biblical prophecies is imminent. How will you respond? This intense series features timely messages from Pastor Skip Heitzig, prophecy expert and author of the Left Behind series Dr. Tim LaHaye, LTG. William G. Boykin, and former terrorist Kamal Saleem. Learn how prophecy is being fulfilled before our very eyes, and consider what we can expect in the near future.


MESSAGE SUMMARY
Former terrorist Kamal Saleem was born to a large Sunni Muslim family in the heart of the Middle East. Recruited by the Muslim Brotherhood at a very early age he completed his first mission to Israel at the age of seven. After several years Kamal was also recruited by the Palestinian Liberation Organization and other radical Muslim groups. Kamal became a Christian in 1985 and now carries a message to awaken the church through Koome Ministries.


MESSAGE SUMMARY
Lt. General Jerry Boykin (Ret.) was United States Deputy Undersecretary of Defense for Intelligence and a founding member of the Delta Force. He played a role in almost every recent major military operation, including the apprehension of Manuel Noriega, service in Grenada, Somalia, and Iraq. He is the author of the book, Never Surrender: A Soldier's Journey to the Crossroads of Faith and Freedom.


MESSAGE SUMMARY
Skip Heitzig is the founder and senior pastor at Calvary of Albuquerque, a congregation of over 13,000 members. His radio broadcast, The Connection, is heard internationally and he is the host of several video documentaries, including Epicenter with Joel Rosenberg, and Israel - Learning from the Land.


MESSAGE SUMMARY
Tim LaHaye is an internationally-known minister and speaker, and author of the Left Behind series of apocalyptic fiction based on the prophecies of the Bible.